skip to main | skip to sidebar

Jessie Oonark: Woman in the Centre

For almost fifty years, Jessie Oonark lived the hunter-nomadic life of the Inuit. Widowed she was eventually forced to move to the hamlet of Baker Lake. It was there in a small matchbox house that she produced wall hangings, drawings and prints that singled her out as one of Canada's greatest artists. In 1975 she was elected to the Royal Canadian Academy of the Arts and, the year before she died, she received Canada`s highest award, the Order of Canada.

Oonark's work presents us with a different vision of the world, a new way of seeing. Her visual imagery reflects her traditional spirituality, her Inuktitut language, her thought processes. When she spoke, she talked in circles, turning the subject to many sides as she communicated all the necessary information to her peers.

Western thinking, which is predominantly linear and analytical, is inadequate for a full appreciation of Oonark's work with its multi-layers of meaning and visual puns. Her art needs to be looked at syncretistically, a mode of understanding that has wide currency in psychology, philosophy and religion. Syncretism refers to an uncritical blending, union or fusion of diverse, even conflicting, ideas, beliefs or principles. With analytic vision, only conspicuous features, clearly differentiated, draw our attention. Other features recede and become an insignificant background. Syncretism's lack of differentiation between figure and ground may seem ambiguous and illogical to the western mind.

Swinton had noted that Inuit artists often compress multiple ideas, structures or events into one graphic form. They are "are able to comprehend total events, thoughts and structures without having to first analyse all component parts and details" (Swinton 1971-2:94). Blodgett develops this idea further, rooting syncretism and the mutability of artistic forms in the Inuit world view, which envisions a highly interdependent relationship of people and their environment. In Inuit art, humans become spirits, shamans, animals or constellations (1979:77). A well-known example of this integration of opposing events and spatial orientation is the incised image of a caribou on the Royal Ontario Museum antler knife collected in 1920. The same caribou can be seen either with its head raised and alert or grazing. Another excellent example is the circular, inverted smiling/sad calendar created by Toongooktook and Ikseegah that uses a visual pun to suggest the changing faces of weather.

The work of Dutch graphic artist M. C. Escher, manifests a similar interpenetration of different worlds. Escher compressed opposing images into one graphic form in a visible process of mutation. In his 1939 print Day and Night black birds, silhouetted against a light-filled sky, transform into white birds at night flying in the opposite direction. Escher described how the eye seems to switch back and forth between the figure-ground recognizing first one form, then another.

Jessie Oonark's sophisticated imagery fills the viewer with wonderment, a fitting tribute to the complexity and richness of Inuit culture. Her imagery seems to bridge effortlessly the diverging worlds that confronted most Inuit in the 20th century. Her work reflects her ability to absorb change and her certitude in the value of Inuit tradition. From this perspective, she endowed every object with a multitude of possibilities.

Inland Eskimo Woman, 1960, Jessie Oonark, Baker Lake (stonecut print; 19.0 x 11.5 in.; National Gallery of Canada). The print Inland Eskimo Woman is so highly abstracted that its outer form strongly resembles a snow knife. Lines are clean and simplified. Details disappear but enough information is conveyed to describe the amautik, the symbol of womanhood, with its generous, protective hood or nasaq, wide shoulders and long trailing akuq (tail). Oonark, who was known for her sewing before she became a graphic artist, was fascinated by clothing from different northerly regions. She describes the amautik in Inland Eskimo Woman as being from Gjoa Haven, her husband's native region (Jackson 1984). Six of Jessie Oonark's early drawings were so exceptional that they were sent to the newly developed Cape Dorset printmaking shop. Inland Eskimo Woman was one of three prints made of these drawings. This was remarkable in that Oonark, completely unknown at that time, was from another region.

Figure in Striped Clothing, 1972, Jessie Oonark and Sevoga, Baker Lake (stonecut and stencil; 18.25 x 16.625 in.) Jessie Oonark said of this piece: "It's a woman braided with those sticks. But it doesn't show her face or eyes. When a woman has long hair, they would use those sticks and they would wrap it around with caribou skin or something; especially caribou skin without fur - to wrap it around. And those points showing are caribou skin tents. It's as if the woman was looking out through the entrance. Those two - the bottom ones - are the ends of her hair, purple coloured" (in Jackson 1984:15).

Driscoll, Bernadette. 1981. Inuit Amautik: I Like My Hood to Be Full. Winnipeg: Winnipeg Art Gallery.


Maureen Flynn-Burhoe is a visual artist and art educator at Carleton University and the National Gallery of Canada.
Posted by ocean.flynn at 6:36 PM No comments: Links to this post 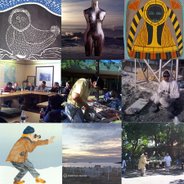 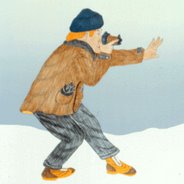